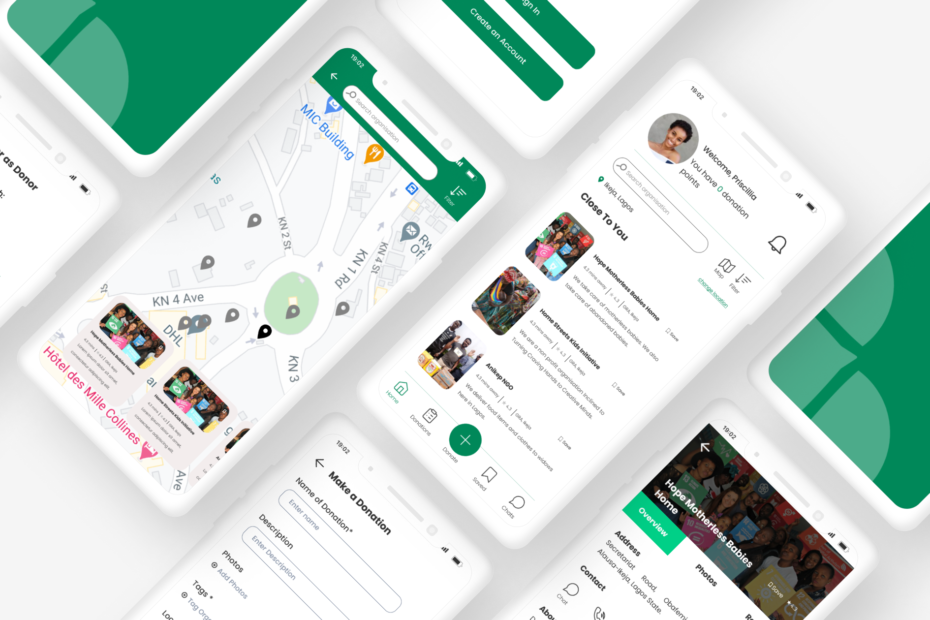 Approach: I was the only UX Researcher for this project. I conducted five user interviews and an unmoderated usability test with 10 participants.

Discovery: I found that participants saw donating clothes as a duty but hardly donated to charities because they were inaccessible. Some participants feared donating to unknown people for religious and superstitious reasons.

Outcomes: I recommended enabling donors to locate beneficiaries via geolocation, informing them about the status of their donations and rewarding them with points for donating their clothes. My recommendations were implemented in the final solution and ramped up my grade to 97%.

I had just begun the training phase of Zuri’s internship and was eager to get my hands dirty. My first project was to design a donation app for WorldCitizen, a humanitarian organisation.

To encourage and help Nigerians within Nigeria to donate clothes to those who need them and to make donating clothes trendy.

WorldCitizen estimated that the global annual consumption of textiles per person increased from 7 to 13kg in the last two decades, reaching 100 million tonnes. But, two-thirds end up in landfills.

WorldCitizen needed to learn about how Nigerians handled their old clothes in order to figure out ways to encourage donations.

WorldCitizen hoped to increase donations amongst Nigerians. So, I knew I would be dealing with a broad segment. I decided to focus on those who donated clothes and leave room for those who didn’t to learn about their attitudes toward clothes. Now, this was a vast segment, but the research was generative; there were a lot of unknowns and grey areas and at this point, it was hard to narrow down the segment.

What is it about Donations?

At the initial stage, I chose to conduct 5 semi-structured interviews since WorldCitizen wanted to learn about how Nigerians handled their clothes. Later, I carried out 10 unmoderated usability tests to ascertain the solution’s success.

Conducting interviews during the discovery phase seemed like the best bet because it helped me generate insights about people’s donation behaviours or a lack of it. The interviews centred on their feelings about clothes and giving them out. Each session lasted between 30-40 mins.

Donation is a Duty, but…

After the first round of data collection, I analysed the data through empathy mapping and an affinity diagram.

The major insight was that most participants saw donating as a duty but failed to do so because trustworthy charities were inaccessible. I found a  gap between donors and benefactors and this showed in my personas. A few did not donate for superstitious and religious reasons. Each persona let me prioritise my ideas — ideas that specifically targeted their problems — with a priority grid.

Finally, I conducted 10 unmoderated usability tests with the prototype. I asked each participant to perform one task: make a donation. Nonetheless, I could have gotten richer feedback if I asked participants to perform more tasks.

Personas: The personas served as a summary of my potential users. From this point onwards, my research focused on what Gabriel and Priscilla would love to see.

Empathy map: The empathy map allowed me to understand that donation was a duty to the participants and that their background, ideologies and surrounding environmental factors affected their decision to donate clothes.

Priority grid: I triaged my ideas using a priority grid and focused on the “high value/low effort” quadrant.

The research I conducted propelled the design of WorldCitizen’s donation app.

The app improves the donation experience by prompting donors to donate their old clothes, linking donors to benefactors through geolocation, instant messaging and feedback systems, collecting reward points for donations, and delivering donations remotely or physically.

The project was graded by the training coordinators. I topped the scoresheet of my assigned cohort with a score of 97%. This was a confidence boost and encouraged me to take on more challenging projects.

Overall, improving the donation experience for a wide variety of users has led me to understand that most users see donating clothes as a duty. However, a gap exists between donors and benefactors. World Citizen attempts to bridge the gap, to make donating clothes trendy, cool and easy for everyone.

Contrary to plying through a linear design path, one unique thing about research and design is that the process is hardly ever linear. I discovered, while working on this project, how iteration can be used to reshape design decisions.

Unmoderated Tests could be better

The unmoderated test focussed on 1 task: to make a donation. While it gave me the insights I needed, I felt I could have gone deeper and explored other parts of the prototype. The test was limited to one task and now I see how the insights could have misled me.