3 – On Good Design, Layoffs and What it Means for Entry-level UXers

With the recent and disproportionate layoffs of UXers, will the software crisis return? How will entry-level UXers cope amidst all the uncertainty? 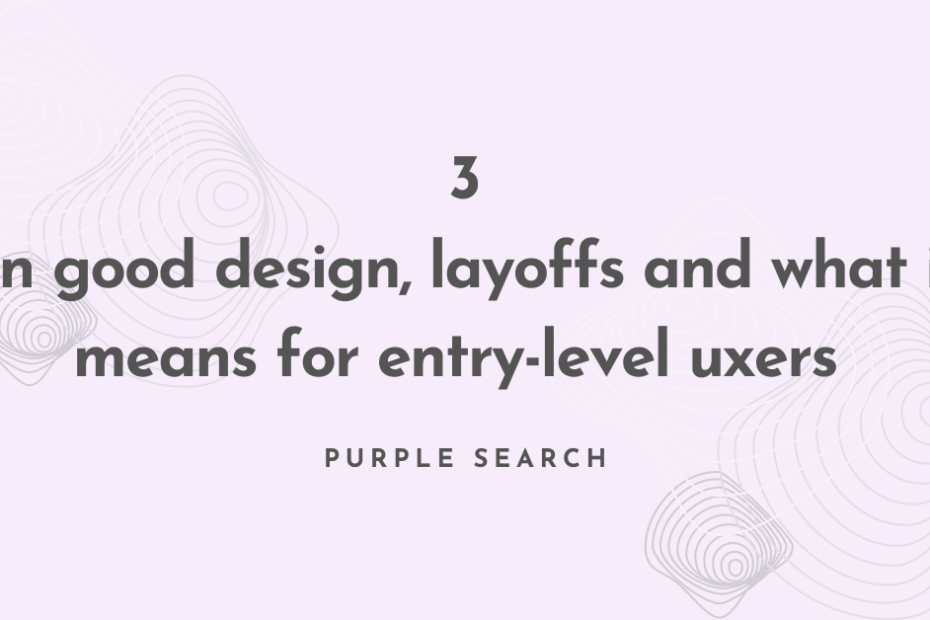 Purple Search is a monthly newsletter about design, research, tech, and the self. I’ve also published this post on substack’s blog/newsletter platform. If you like what you see and would like to receive each issue in your mail, subscribe here. 😉

⚡I’ve been watching the World Cup matches, and I love how some underdog teams are upending the status quo; I admire how they are struggling to balance the scale.

Between the 1940s – 2000s, what has now evolved into the tech industry was the burgeoning field of software engineering. During this period, businesses and academics recognised the importance of software: the link between the user and the computer. Yet, software production suffered overblown budgets, extended timelines and a lack of skilled programmers. As using software became central, it suffered a crisis that businesses, academics and programmers could not solve with automatic programming languages, programming certifications, and the foundation of the academic field of computer science.

Nathan Ensmenger, the author of The Computer Boys Take Over Computers, Programmers, and the Politics of Technical Expertise proposed that the software crisis would have ended sooner if software engineers understood the non-technical components that formed the software environment. Since software links users to computers, the programmer must consider all elements involved in its production: the manufacturers, the business, the managers, and the users in their social, political, and economic contexts.

Software, at the time, rarely satisfied its users. Programmers isolated its production without understanding that all software is socially constructed and inseparable from its social context. Ensmenger’s suggestion calls for good, holistic and human-centred design. After all, good design education equips designers to understand the social context of humans and how they might align with business needs.

So, how does this relate to this month’s issue?

How secure are UX roles? Right now, it’s a mess.

No business is safe. In 2022, we’ve seen staff cuts in companies big and small, including Facebook, Better.com, Coinbase, and Twitter. Public markets have been hit hard in 2022, and the effects have trickled down to private companies as well. Valuations have started to dip, and design careers aren’t as stable as they have been in recent years. Within organizations, frequent changes in business strategy have resulted in the axing of ongoing projects–or even entire teams.

Fabricio Teixeira and Caio Braga, UX Collective, The State of UX in 2023

“We might then expect similar ratios in our data if layoffs were proportional across the three functions,” says Pybus. “Instead, we found that 1 designer for every 6 engineers was laid off, about 1.7 times more than expected. Worse, three times as many researchers were laid off than expected — about 3 for every 5 designers.”

Pybus’ analysis is not perfect. But if 1 designer for every 6 engineers and 3 researchers for every 5 designers were sacked, the software crisis may repeat itself.

Our tech-dependent planet perforated with misinformation, prejudice, and AI bias needs good design. We need products and services that consider the social context under which they operate. The inability of programmers to consider the broader context of the programs they wrote partly caused the software crisis. As companies disproportionately lay off Designers and Researchers, the software crisis might repeat itself.

The increased uncertainty and layoffs have me worried about people like me: entry-level UXers who have expended time and energy upskilling to match the competition yet have struggled to find a role.

With the recession beckoning, the current job market is unsuitable for entry-level UXers. After researching 21,639 UX Research roles on Indeed from July 2021 – September 2022, Pybus discovered that “on average, just 2.5% (SD=1.3%) of all UX research roles observed were explicitly flagged as junior roles, but that varies wildly from month to month.”

The available jobs for UX Researchers peaked in February 2022 and began to decline in April 2022.

Here’s the irony: Hired.com reported that employers, in 2020, had 286% interest in UX roles and glassdoor included UX Design as part of the top 50 jobs for 2022 in the USA. But here we are worrying about the recession-induced layoffs.

Focus on What You Can Control

Experts have predicted the recession will manifest in 2023. As a Nigerian who has experienced multiple national recessions, this is the first time I will experience a global one as an adult.

If you are an entry-level UXer, you know by now that most companies do not have the resources to hire you. So, what should you do?

The best advice I’ve gotten comes from Cori Pepelnjak. She said I should focus on what I can control. What can we do in this regard?

Never stop learning. Never. For maximum impact, combine theory with practice. Take courses, read books and articles, do personal projects with a defined scope or try to find a freelance or contract role.

I’ve heard mixed reactions about entry-level UXers freelancing. Some seniors advise that freelancing might be too much for us to handle. I think it depends. Scoped-out contract work is a great way to get your foot in the door. It might just propel you to launch your career. Volunteer if you are unable to find a role. My role as a volunteer User Researcher for DemocracyLab allows me to experiment and practice.

Show what you can do in an honest and well-packaged way (no lies!). Focus on your process, why it went that way and how it made an impact. Show how you think as a Designer or Researcher.

Do not ever think that you have finished working on your resume and portfolio. I saw somewhere that you should treat them as MVPs. Always iterate because learning never stops. My resume and portfolio are on version 5 or maybe 6 and counting. I’m not going to stop iterating because they’ll keep evolving.

Look for Companies that Need You

When I started job hunting, I fell for the “apply for as many jobs as you can” syndrome. Most roles I stumbled on were senior positions based outside Nigeria and Africa. The entry-level remote roles I found needed applicants to be in a specific location. Once, I stumbled upon a job opportunity calling for entry-level researchers to work remotely for Indeed. I was confident I would cinch the role but received an email the next day saying they needed candidates that resided in the US.

I wasn’t a good fit for those companies, and neither were they for me. I wasn’t intentional about my job search. Since then, I’ve decided to look for African UX Research roles that’ll allow me to utilise my skills on the continent and attain my long-term goal. I’ve found a contract role that fits these criteria. Yay! But my goal is to get a full-time role.

Networking means building meaningful relationships not making noise on social media. Exhibit your skills, show what you can do candidly. It helps if you are straightforward with the people you intend to network with and if you also provide some value. Networking will get you to the door, but your capabilities will open it. Do not be entitled and expect people to always respond to you. That’s life. Don’t take it personally.

Leverage social media. My introverted self — the whole me — thanks the creators of the Internet and platforms like LinkedIn for dissolving geographical boundaries. I can attend events, take courses and purchase books remotely.

The current job market is a consequence of the recession. The most you can do is focus on what you can control and make your efforts count.

That’s it. Thank you for reading!

Why don’t you share this newsletter with your network hmmm?

I hope you’ll learn a few things from my recommendations.

More to come next month. Tell me what you think by commenting on this post.

Purple Search is a monthly newsletter about design, research, tech, and the self. I’ve also published this post on substack’s blog/newsletter platform. If you like what you see and would like to receive each issue in your mail, subscribe here. 😉